There were mixed emotions at the Croydon Sports Arena for the final home game of the season for Croydon.

Their 1-0 win over Westside was the last for manager Liam Giles and assistant John Gladwin, who have notched up 100 matches at the helm before announcing they would be moving on at the end of the season.

Croydon had most of the possession but Westside had the better chances in the opening exchanges and it was the yellows of Westside who came closest to scoring with a deflected left-footed drive going inches wide.

Finally, Croydon started to press, with Johnny Akoto pushing up as a wing-back, and on the 38th minute he whipped over a cross that was headed just over.

Giles made the most of the half-time team-talk and the Trams came out revitalised.

On the 52nd minute following a dribble from Akoto, his shot went sparingly wide.

Two minutes later he went one better, after rounding the defence Akoto pulled the ball back and the onrushing Ollie Beauchamp scored the Trams’ first Arena goal in five matches.

A free-kick with 20 minutes remaining was hit straight at the Westside goalkeeper as the Trams pushed to extend their lead.

However, Westside started to pepper the Croydon area. The blue quartz of Croydon held strong and kept their visitors at bay, giving Giles and Gladwin a final home win in charge. 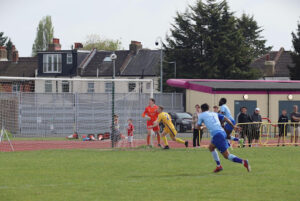 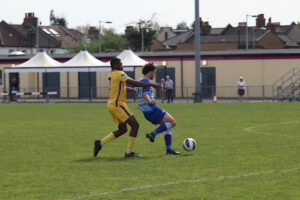